A big thank you to everyone who played!  The weather was fabulous for this time of year – no frozen greens, no wind and it looked like everyone had a great time.  Much appreciated!

Mostly complete results.  Some teams have been removed to prevent harassment from their friends and loved ones. 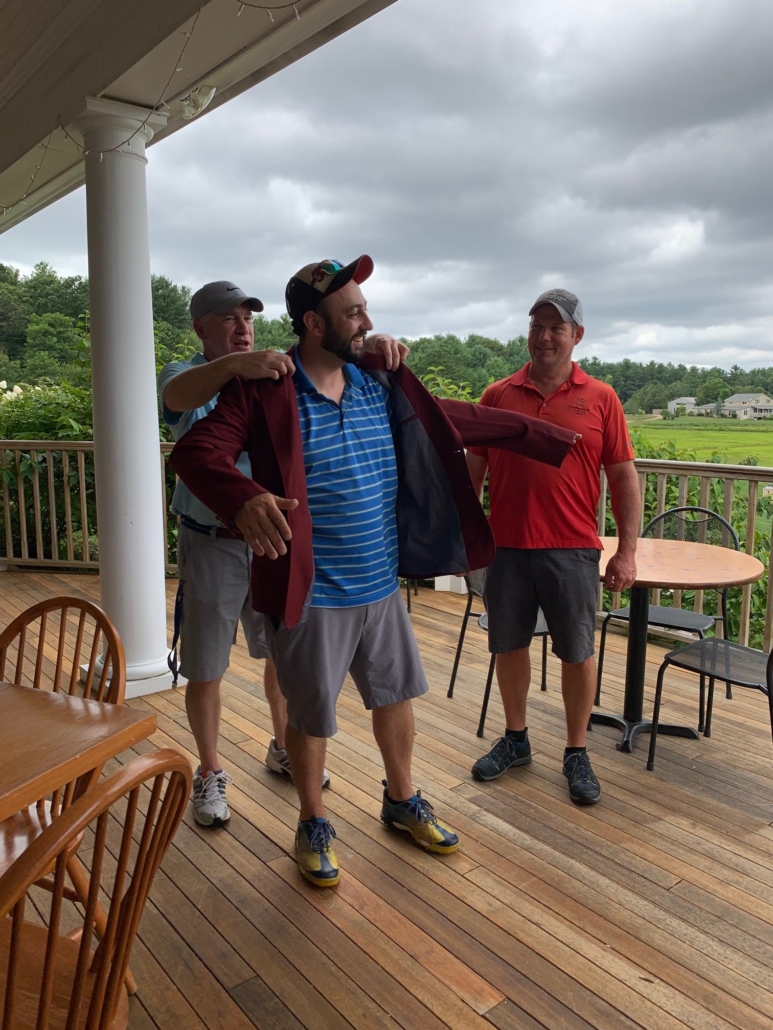 Reed Bacchiocchi hung on for a four stroke win over Mike Sullivan to win the 2019 Club Championship.  Tom Audette made 5 birdies in the second round to shoot 65 and beat Steve Kenyon by a stroke to win the net.

Reed started the day with a big lead of 5 strokes over George Costa and 8 strokes over Mike.  Mike’s first tee shot of the day was potentially an omen for the day, when he half topped it just past the middle tee box and somehow it miraculously hit the bank of the bog, popped up, took a hard left and rolled safely down the cart path.  Despite being admittedly nervous playing with the lead, Reed still lead by 6 after the front nine and extended his lead with a birdie on 11.

Things got momentarily interesting on 13, when Reed airmailed the green and his ball came to rest at the base of a tree.  After playing a backhand one handed shot he scraped it around and eventually 2 putted for a 7.  While all this was happening, Mike had a 3 footer for birdie with would have been a 4 shot swing.  Unfortunately for Mike his missed the putt, so the lead remained at 4 strokes.  Both players made matching birdies on 14, and Reed cruised to victory from there, stuffing it tight on 17 to put the final nails in the coffin.

Congratulations to Reed and thank you to everyone who played!

Less than ideal conditions to start the club championship to say the least.  By some miracle, 49 players participated in the Tuesday League, but only 13 had the guts to sign up for the Club Championship.

Reed Bacchiocchi has a substantial 5 stroke lead after the first round.  After a bogey on 1, he settled into a string of pars and a birdie on 6 to play the front nine in even par.  After a bogey on 11, he birdied 13, 14, and 16 to finish his round in a 1 under par 60.

In second place, George Costa made 4 birdies on his round but took a 7 on the fourth hole and a double bogey on 18 to derail what could have been a great round to finish at 65.

Defending champion Mike Sullivan rounded out the top 3 with a birdie-free and double bogey free round of 68 that he wasn’t particularly excited about.   Those three players will the last group off the tee on Saturday morning at 8:30.

On the net side, it’s still very much up in the air.  With Reed and George focused on the gross I’m sure, there is a log jam of 3 players at 63 and another 3 at 64 all within easy striking range.

Colin Dillon hit his tee shot on 15 to four feet and made the easy eagle putt, but that was about the only highlight from his round.